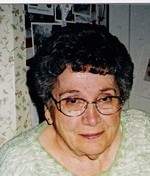 The funeral services for Agnes "Aggie" Laura Korf, 83, Frazee, MN, will be held Friday, May 8, 2009, at 11 a.m., at Sacred Heart Catholic Church in Frazee, MN with Father Xavier Ilango officiating. Burial will follow the service at Sacred Heart Catholic Cemetery in Frazee. Visitation is scheduled at Furey Funeral Home in Frazee on Thursday, May 7, 2008, from 5 - 8 p.m., with a prayer service at 5:30 p.m., and also one hour prior to the service at the church. Aggie died at the Frazee Care Center on Friday, May 1, 2009.

Agnes Laura Sauer was born on June 5, 1925, in Buckman, MN to August and Laura (Poster) Sauer. She grew up in Buckman and later moved to Valley City, ND. On November 6, 1946, Aggie married Henry Korf. She worked as a baker for Red Owl in Fargo, ND and as a cook for several restaurants. They moved to Vergas, MN in the late 50's where they were one of the first residents to build on Trowbridge Lake. They moved to Frazee, MN in 1975 where she was a manager and bartender at the Frazee VFW. Later on she sold Watkins products.

Aggie was very well known at all the local Bingo parlors and very much loved a good game of whist. She and Henry would travel great distances for a church social or dinner on any given Sunday. She also enjoyed fishing and outdoors in her younger years. She moved into the Frazee Care Center on September 20, 2006.

Preceding her in death are her husband Henry; a brother Rod; sister Bernidette; and her parents.

To order memorial trees or send flowers to the family in memory of Agnes Korf, please visit our flower store.