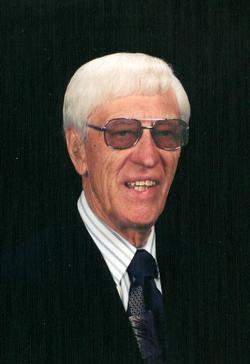 Albert Frank Emile Willprecht, 97, died Friday, March 14, 2014, at the Frazee Care Center in Frazee, MN. Funeral services for Al will be held 11:00 a.m., Saturday, March 22, 2014, at Bethlehem Lutheran Church in Frazee. Visitation will be held from 9:30 a.m. until the time of the service at the church on Saturday. Lunch will be served following the service for all to attend. Burial will be held at Lakeside Cemetery, spring 2014.

Albert was born August 30, 1916, the son of Matthew and Anna (Meier) Willprecht, both emigrants of Germany. Albert was the 15 th of 17 children born to the couple. Frank and Emile were his two sponsors at baptism time. He was born and raised in the Lidgerwood, ND area and attended rural school through the 8 th grade.

During World War II, he worked at Glen M. Martin Aircraft in Baltimore, Maryland where he earned the title, “The One-Man Riveter”. He came back to North Dakota where he met his wife to be, Nora Dunham from Pelican Rapids, MN, and they were married June 22, 1942, and moved to his farm near Lidgerwood, ND.

Al, Nora and Al’s brother, Harry, purchased the Morningside Motel in Frazee, MN in 1948. Al started his salesman career selling used cars during the war. He sold cars for Francis Peterson Nash in Detroit Lakes, Nelson Ford Co. in Frazee, and Kent Pontiac Co. in Detroit Lakes. He was asked to interview and accepted a job with Midwest Oil in Fargo. His territory was parts of South Dakota, North Dakota, and Minnesota. Besides canvassing the territory for business, he spent hours on the phone at the office taking orders for transport of gas. He also carried a small supply of grease and oil in the back seat and trunk of his vehicle. He set up new Midwest Stations and arranged financing with the office.


With his job taking him out in all sorts of weather, the storms of winter and heat of the summer, he was probably the first to enjoy the comfort of air-conditioning in his car.


Al saw an opening in Sloan, IA, at a company known as Lely, which sold farm machinery made in Holland. He worked giving demonstrations of a piece of equipment that took the place of a disk or fall plowing.

In 1978, as he was nearing retirement, he said he was going somewhere where it didn’t snow. The couple spent 26 winters in Arizona. While in Arizona, he took a job with a travel agency called “Especially For You”. There, he sold tours to other residents in the courts.


Al never forgot an anniversary or birthday and always had something planned for these occasions. The strangest anniversary the couple spent was when Francis Peterson put us on a train in Detroit Lakes, to go to Oshkosh, WI, to bring back two slightly used cars. Al always had an affinity for cars and the couple had their first car shipped to Lidgerwood, ND, after the war.


Following a car accident in 2008, Al took to helping Nora with the household duties. Al cooked, baked and even enjoyed doing the dishes.


Due to Al’s dementia and loss of hearing, he entered the Frazee Care Center on October 13, 2010.


The Christian Faith was always an important part of the Willprecht family. Al attended church every Sunday, served as an usher, attended Men’s Club, Voter’s meetings and sang in the choir. He enjoyed helping with church dinners, and often peeled the apples for pies. He gave the Pastor a hearty handshake each time he came to the Care Center for services. Al’s life was full of God’s blessings.


Preceding Al in death were his parents; 16 siblings; 1 nephew, Matthew Joseph Willprecht, who lived with them after his parents passing; and 1 great granddaughter, Amanda Watson.

To order memorial trees or send flowers to the family in memory of Albert Willprecht, please visit our flower store.