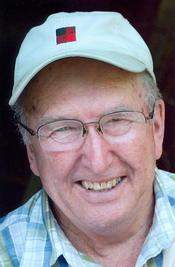 Alfred H. Engle, age 78, of Detroit Lakes, MN, formerly of Frazee, MN, passed away peacefully Saturday, August 18, 2012., while vacationing in Spirit Lake Iowa. Funeral services will be held 11 a.m., Wednesday, August 22, 2012 at St. Paul's Lutheran Church- Evergreen, MN. Interment will be made in the St. Paul's Lutheran Church Cemetery. Lunch will be served at the church following the service. Visitation will be held from 4-7 p.m., Tuesday, August 21, 2012 at the Furey Funeral Home in Frazee, MN with a prayer service to take place at 7 p.m. Visitation will continue one hour prior to the service at the church on Wednesday.

Alfred Harold Engle was born October 24, 1933, in Frazee, MN, the son of Graydon and Grace (Kruger) Engle. He graduated from Frazee High School. He joined the United State Army in the spring of 1955. He then married Janice Corrine Eck on July 9, 1955. After being honorably discharged from the Army in 1957, he began dairy and beef farming until he retired and moved to Detroit Lakes, MN. He spent the last several years working with Janice at Breezy Shores Resort. He was baptized, confirmed and an active member of St. Paul's Lutheran Church in Evergreen. He held many various offices at the church as well. He was an active member of Thrivent Financial for Lutherans and held the office of Secretary/Treasurer for many years.

He enjoyed spending time with all his family, grandchildren and great grandchildren. He also enjoyed playing cards, bowling, crossword puzzles, playing horse shoes and listening to the Twins on the radio.

Preceding Alfred in death are his parents, a grandson Erik Engle and a great granddaughter Nayana Iacono.

To order memorial trees or send flowers to the family in memory of Alfred Engle, please visit our flower store.