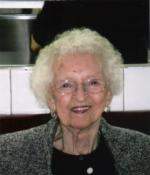 Friends may call 7:00 - 8:30 with a prayer service at 8:00 PM Thursday at Furey Funeral Home in Frazee. The visitation will continue 1 hour prior to the mass on Friday at the church. Casket bearers will be Nicholas Walker, Patrick Seaworth, Tyler Walker, Terrill Walker, John Seaworth and David Walker. Interment will be in Sacred Heart Cemetery.

Anna M. Mayer, known as Peggy, was born October 12, 1918 in Edgely, North Dakota the daughter of Oscar and Louise (Geiger) Olson. She was raised in Frazee, MN and is a graduate of Frazee High School. Peggy was united in marriage to James E. Mayer November 27, 1940. They moved to Minneapolis, MN in 1941, returning to Frazee in 1943. They owned and operated Jim's Hardware and Variety Store in Frazee for 26 years. After Jim's death in 1995, Peggy moved to Winchester on Washington in Detroit Lakes and then to White Bar Lake, MN to be near her daughter, Louise.

She was a member of Sacred Heart Catholic Church, Christian Mothers and the Frazee PTA. Peggy was a loving wife, mother and grandmother. She was an excellent cook and seamstress. She loved to bowl, golf, follow the Minnesota Twins and Vikings and play bridge. Peggy was a source of love, joy and laughter to all who knew her.

To order memorial trees or send flowers to the family in memory of Anna Mayer, please visit our flower store.