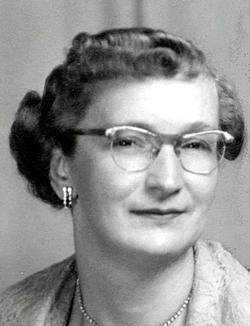 Anna C. Tessman, age 93, of Detroit Lakes, MN, passed away Sunday, December 27, 2015, at Emmanuel Nursing Home.  Funeral services will be held 11 a.m., Thursday, December 31, 2015, at Zion Lutheran Church in Detroit Lakes.  Visitation will be held one hour prior to the service at the church on Thursday.  Burial will be made at Zion Lutheran, Toad Lake Cemetery in rural Frazee.

Anna was born on August 3, 1922 in Dent, MN, to her parents, Diedriche and Maria (Kolman) Wegman. She grew up in Dent where she attended country school. Anna was united in marriage to Albert Jahnke on June 17, 1940. Her life was saddened by his passing.


Anna married Leo Tessman on June 3, 1951. The couple farmed in Toad Lake.  Anna enjoyed life on the farm where she cared for her family, tended to the animals and large gardens, and enjoyed cooking and baking.  Anna loved the holidays and often hosted large Thanksgiving and Christmas gatherings.  She loved the time she spent with her ever growing family.

To order memorial trees or send flowers to the family in memory of Anna Tessman, please visit our flower store.