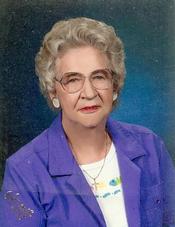 Funeral services will be held 1:00 p.m., Friday, February 8, 2013, at Bethlehem Lutheran Church in Frazee. Visitation will be held from 11:30 a.m. until the time of the service on Friday at the church. Burial will take place at Lakeside Cemetery in Frazee.

Ardis was born on July 10, 1932, in Rothsay, MN, to Milla and Art Hovland. She was baptized and confirmed in the Lutheran faith. She attended and graduated from Pelican Rapids, MN high school. Following her schooling she worked in Michigan and then as a bookkeeper at Gambles Hardware Store in Detroit Lakes, MN.
Jerry Brenk proposed on Big Detroit Lake while ice fishing and they joined as partners in marriage on September 25,1960, as well as partners in business. They bought the Frazee Forum where she forever will be remembered for her "Uff-da" column.

Ardis and Jerry raised 2 children, David and Shelly. Along with raising her family, Ardis continued to work at the Frazee Forum until retiring in October of 1995.

Ardis was very dedicated to her family, her work, and to her friends. Her faith made her a very beautiful and caring person. She enjoyed traveling with her husband, Jerry, Dave, Shelly and also with her girlfriends, playing cards, bingo, golf, and the summers at the cabin on Lake 7.

On December 8, 2010, Ardis moved into the assisted living home in Frazee. Her plans were to move back to her house, but her health would not allow it, although she and her daughter, Shelly spent many nights there on vacation. In September of 2012, Ardis moved to the Nursing Home side of the Frazee Care Center where she could receive additional care.

Ardis is survived by her daughter, Shelly Willberg of Bagley, MN; 2 grandchildren: Trevor and Travis Willberg of Bagley; a great grandson, due in February; a sister-in-law, Jeanne Kruger of Audubon, MN; and numerous nieces and nephews.

To order memorial trees or send flowers to the family in memory of Ardis Brenk, please visit our flower store.