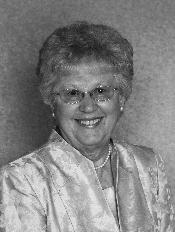 Arlene Frances Wehking, the daughter of Carl and Mamie (Minnick) Wehking, was born March 27, 1937, at their farm home just northeast of Cosmos MN, in Meeker County. Arlene was baptized and confirmed at Trinity Lutheran Church located in Brookfield Twp., Hector, MN. Arlene attended and graduated from Litchfield Public School in 1955. Two years later, she married Clifford Mortensen on May 12, 1957. Two children were born to this marriage, Julie and Timothy. Clifford was killed in a farm accident on April 16, 1961. Arlene and the children returned to live in Cosmos to be close to family. Arlene found employment at the Cosmos Public School where she worked as the high school principal secretary for the next 28 years, retiring in 1994.

Arlene and Rodney Kolle where united in marriage on July 29, 1972, at Peace Lutheran Church in Cosmos. They resided in Cosmos until they retired in 1994. Upon retirement, Arlene and Rodney moved to Vergas, MN, and retired on East Spirit Lake where they enjoyed spending time together and with family and friends.

Arlene was preceded in death by husband Clifford; parents, Carl and Mamie; brother, Myron; and infant sisters, Donna and Gloria.

Throughout her life Arlene was active in her church sharing many roles in various women's organizations. Arlene lived for family, friends and birthdays. She enjoyed cooking, canning, quilting, visiting and being involved in her family's activities.

To order memorial trees or send flowers to the family in memory of Arlene Kolle, please visit our flower store.