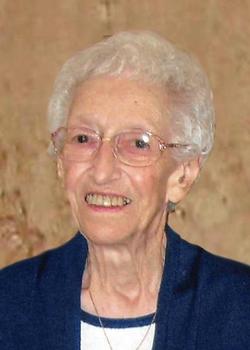 Arlene E. Schreiner, 88, died peacefully, January 23, 2016 at the Frazee Care Center. Funeral service will be held 11 a.m. Friday, January 29, 2016 at Sacred Heart Catholic Church in Frazee, MN.  Visitation will be held 5-7 p.m. Thursday, January 28, 2016 at Sacred Heart Catholic Church with a rosary service to be held at 6:45 p.m. followed by a prayer service.  Visitation will continue one hour prior to the service at the church on Friday.

Arlene was born April 5 th 1927 in Erie Township to Otto and Emma (Dahring)  Schoenberger.  She attended country school at District 70 and high school in Frazee.  She spent hours at the dance/roller skating hall owned by her parents along the Ottertail River in Erie Township.  She met Henry Schreiner at the Erie 34 Club where they both worked.  They were united in marriage on September 24, 1952 in Detroit Lakes, MN.  They made their home in rural Detroit Lakes later moving to the Frazee area where they started their family and raised their 5 daughters.  Arlene was active in the Sacred Heart Christian Mothers, a 4-H leader and Woman’s Bowling Leagues.  She loved to knit and sew, making many matching outfits for her daughters.  Her love of embroidery and knitting helped her create beautiful keepsakes for her daughters and grandchildren.  Raising a large garden and preserving fruits and vegetables was an enjoyment for her, as everyone loved her canned fruit sauces and her raspberry jam.


She enjoyed attending school activities of her daughters, grandchildren and great grandchildren, often riding the team bus to games and track meets. She was an excellent cook.  Her family especially enjoyed her home-made chicken soup and coffee cake on Christmas Eve.  She was a very hard working lady at home, at church and in the community.  As a young woman she was employed by Bergen’s Greenhouse and Jim Evans’ Grocery.  Later she worked at Gambles Hardware and the high school cafeteria in Frazee.


Arlene is preceded in death by her parents Otto and Emma Schoenberger, 2 sisters, Lorraine Sperling and Gladys Blauert, 1 brother, Lloyd Schoenberger and 1 granddaughter, April Stenger.
To order memorial trees or send flowers to the family in memory of Arlene Schreiner, please visit our flower store.