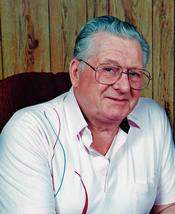 Chub Christensen was born to Herb and Alta (Jacobs) Christensen on February 11, 1934, in Hendricks, Minnesota. Chub was the oldest of nine children. He grew up in Battle Lake, Minnesota, where he graduated from High School. Chub was married to Nancy Wade for 56 years. He drove truck for 43 years; equivalent to 160 trips around the world. Chub's interest in trucking began with ride-alongs with Watt Watson. He worked for Jacob's Station & Trucking, Daggett Truckline in Frazee, MN, Daggett Relay Station in Edgar, WI, North Star Truckline in Thief River Falls, MN, and Snappy's Inc, Detroit Lakes, MN. Chub retired in 1996, after 25 years at Snappy's Inc., and continued to drive part-time for Foltz in his retirement.

Chub was a member of the Frazee Fire Department for 25 years. He was a charter member and a trustee of the Knights of Columbus of Sacred Heart Catholic Church. Along with his wife Nancy, he was honored to be a grand marshal for the 2009 Turkey Days parade.

Chub was known for his love of family and friends, both of whom were numerous. He always placed his wife and family before his own needs and wants, many the sacrifices Chub made for love of family and others. Chub was an avid camper and instilled his love of camping in his children, grandchildren, and great grandchildren. He spent hours tinkering in the garage, working on and restoring whatever he could get his hands on (bicycles, lawnmowers, trucks, cars, tractors... ). Chub shared his mechanical knowledge with all of us. He was always ready for a hand of cards, especially in healthy competition with his wife. Chub possessed a strong work ethic which he passed on to all his children. He collected hats from everywhere, which resulted in a collection of more than 600. Chub loved a good joke and was willing to share it with everyone. Despite his many health issues in latter years, Chub faced adversity with courage and good humor.
Chub is survived by his wife, Nancy, and his eleven children: Peggy Osterman of Detroit Lakes, MN, Paul (Nancy) of Frazee, MN, Leanita (Dr. Robert Buchanan) of Castle Rock, CO, Karen (Noel Walter) of Duluth, MN, Cindy (Charlie Hensel) of Henderson, NV, Kathy (Don "Schmiddy" Ulschmid) of Frazee, MN, Wade (Salli) of Duluth, MN, Sonya Crocker of Monticello, MN, Tim (Kay), Tony (Emily), and Annett (Anna Bear) all of Frazee, MN, 43 grandchildren and 23 great grandchildren. Chub and Nancy welcomed Floyd Moltzan, Eric Mayer, and Mark Heikkila into their fold. Survived by siblings Annetta (Don) Luhning, Rosalie (Roy) Ketcham, Herb (Betty) Christensen, Robert (Fern) Christensen, Gary Christensen, and Clifford (Maureen) Christensen and sisters-in-law Jackie Christensen and Grace Christensen. Preceding Chub in death were his parents Herb and Alta, two brothers, Bill and Jack, sister-in-law Josephine, son-in-law Dan Osterman, and grandson Christopher Ulschmid.
Funeral services will be held Saturday, November 26th at 11:00 a.m. in Sacred Heart Catholic Church, Frazee, MN. Visitation will be held Friday, November 25th at Sacred Heart Catholic Church beginning at 5:00 p.m. with recitation of the Rosary by the Knights of Columbus at 6:30 pm followed by a Prayer Service at 7:00 PM.

To order memorial trees or send flowers to the family in memory of Arvin Christensen, please visit our flower store.