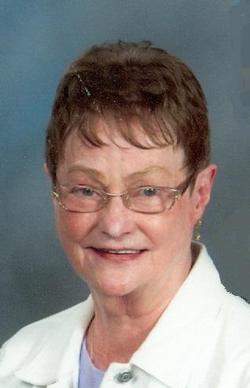 Barbara “Barb” Jean Olson, age 77, of rural Frazee, MN, passed away peacefully at her home, with her husband at her side, under the care of Red River Valley Hospice on Tuesday, October 6, 2015.


Funeral services will be held 11 a.m., Wednesday, October 14, 2015, at Faith Free Lutheran Church in Detroit Lakes, MN. Visitation will be held one hour prior to the service at the church on Wednesday. Burial will be made at Fort Snelling National Cemetery, Minneapolis, MN on Thursday, October 15, 2015 at 1:15 p.m. at gathering area number 3.

Barb was born October 25, 1937, in Colfax, WI, to Walter and Cora Schultz. She grew up in Colfax, graduating from Colfax High School with the class of 1955. She then went to work as a keypunch operator at Lutheran Brotherhood in Minneapolis, MN, for 11 years. Barb was united in marriage to Ralph Olson September 2, 1961, at Colfax Lutheran Church. The couple then made their home in Apple Valley, MN, where they raised 4 children: Kara, Siri, Bart and Nathan. With a growing family at home, Barb dedicated herself to her family. She enjoyed the years she was at home to care for them. The family endured the loss of son, Nathan, in 1974 due to a rare liver disease. In 1976, the family ventured to Dillon, Colorado, “ski country”. The family enjoyed learning to ski and enjoy the outdoors. In 1978, they moved to Riverside, California. In 1991, Barb and Ralph moved to rural Frazee, MN, where they relished in the beauty and peace of the countryside. Barb was a member of Faith Free Lutheran Church in Detroit Lakes. In 2003, after many years of weakened body and health, Barb was diagnosed with muscular dystrophy. She was able to remain in her home under the loving care of her husband, Ralph until her passing.


Barb was preceded in death by her parents; son, Nathan Olson; sister, Inez Sipple; and brother-in-law, Leo D’Andrea.
To order memorial trees or send flowers to the family in memory of Barbara Olson, please visit our flower store.