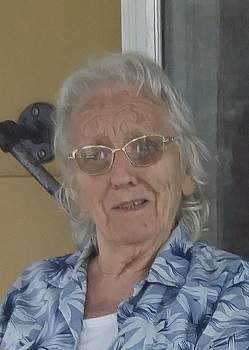 Beatrice “Bea” Eide, age 88, of Frazee, MN, passed away at her home on Friday, March 23, 2018.  Funeral services will be held at 4 PM, Wednesday, March 28, 2018, at Furey Funeral Home in Frazee.  Visitation will be held from 2 PM until the service at 4 PM on Wednesday. Burial will be made next to her husband, Erling, at 1 PM, Thursday, March 29, 2018 at Fort Snelling National Cemetery in Minneapolis, MN.

Beatrice “Bea” was born March 10, 1930, in Leeds, ND, to Joseph and Lena (Struxness) Morkert.  She was the youngest of 8 siblings.  She was baptized and attended school in Leeds.  Bea grew up during the depression, though she never knew it.  She enjoyed life on the family farm where she spent her days swimming in an old water hole in one of the back pastures. When she got older, Bea took a job in town as a waitress.  She met Erling Eide in 1949.  The couple married November 24, 1951, in East Grand Forks, ND.  Together, they raised 4 children.  They lived in California, Colorado and Oklahoma before settling in Frazee in 1970.  Bea enjoyed life as a “domestic engineer” as she called it, raising her children, gardening, canning, and spending time outdoors.  She liked to iron and earned spending money ironing for others in town for a number of years.

As her children grew and had families of their own, Bea and Erling continued to host family cook-outs, where everyone gathered in the backyard and enjoyed Bea’s homemade dill pickles, and choke-cherry jam among other things.  Bea loved to participate in the family games and activities that went on during the cook-outs where some of her best memories were made.  She decorated her home for every holiday and season. She also had a love for animals and had many animals around throughout the years. Bea was loved greatly by her family and will be dearly missed.

To order memorial trees or send flowers to the family in memory of Beatrice "Bea" Eide, please visit our flower store.
Open