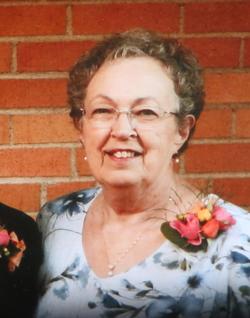 Betty Louise Cook, age 83, of Frazee, passed away December 6, 2014, at the Frazee Care Center under the care of Red River Valley Hospice.

Betty was born February 15, 1931, in Detroit Lakes, MN, to John and Mary Ann (Lorsung) Kraker Sr. She was baptized and confirmed at Most Holy Redeemer Catholic Church in Ogema, MN. Betty attended elementary school in Ogema, MN, and Waubun High School, graduating in 1949.

Betty married Cecil Cook at Most Holy Redeemer Church in Ogema, MN, on October 27, 1949. The couple made their home in Ogema for the first 10 years of their married life. In 1959, they moved their family; 3 daughters and 1 son, to Frazee.
Betty was a homemaker and wonderful mother. In 1961, she began working at the Frazee Red Owl Store. In 1969, Betty was hired at the Frazee School as a cook. She worked her way to head cook, retiring in 1996.

Betty was a member of Sacred Heart Catholic Church. Her faith in God was very important to her. She was a member of the Christian Mothers, Paradise Singers, Ladies Auxiliary VFW, and Red Hats. She enjoyed bowling; and was inducted into the bowling hall of fame. She also enjoyed golf, playing cards and games with her family and friends. Betty, along with her beloved husband, Cecil, enjoyed camping and many summers at Lake 6.

To order memorial trees or send flowers to the family in memory of Betty Cook, please visit our flower store.