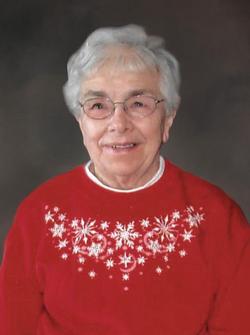 Funeral Services will be at 11 a.m., Monday, January 25, 2016, at Sacred Heart Catholic Church, Frazee. Burial will be made at the Sacred Heart Catholic Cemetery, Frazee. Visitation will be held from 5-7 p.m., Sunday, January 24, 2016, at Furey Funeral Home, Frazee with a prayer service to be held at 6 p.m., followed by the rosary service. Visitation will continue one hour prior to the service at the church on Monday.


Betty was born January 8, 1931 in Columbus, Nebraska to John and Frieda Herold. On August 24, 1950, she married Harold Nebosis in Columbus, Nebraska. In 1961, they moved to Frazee where they farmed for many years. Living on the farm, Betty enjoyed spending time outdoors. She did much of the farm work and always had a huge garden. She was an excellent cook and baker. The entire family enjoyed many holiday meals at the farm. More than anything, she loved her children, grandchildren, great grandchildren, and her dogs. After farming, Betty worked at the Frazee Care Center for several years.


She was preceded in death by her husband, Harold, son-in-law Mike Krejci, her parents, sisters, Polly and Bernie, and brother, Gus.
To order memorial trees or send flowers to the family in memory of Betty Nebosis, please visit our flower store.