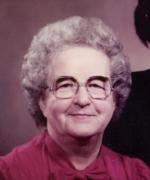 Friends may call 5:00 - 8:00 PM with a prayer service at 7:00 PM Wednesday at Furey Funeral Home in Frazee. The visitation will continue 1 hour prior to the service at the church on Thursday.

Beulah Lorraine Sanders was born March 17, 1921 in Balaton, MN to George and Elida (Pederson) Sanders. She moved with her family to Frazee as a young girl. Beulah attended rural Frazee schools and is a 1939 graduate of Frazee High School. Beulah was united in marriage to Leonard Frank June 11, 1950 at Bethlehem Lutheran Church in Frazee. She worked at Peoples State Bank for over 30 years, retiring in 1985. She was a member of Bethlehem Lutheran Church, the Lutheran Women's Mission League, Altar Guild, served as the church financial secretary until 2009 and the Ladies Aid. She served as treasurer of the Frazee Community Club, was on the Lakeside Cemetery Board and was an election judge through the 2008 elections. Beulah volunteered at the Frazee Public Schools and at the Frazee Care Center for ever 20 years. She was also a member of the "55 + Club" and the Frazee Widows.

She enjoyed seeing her granddaughters, watching baseball at all levels and was an avid Minnesota Twins fan. She also enjoyed following Frazee Hornets sports teams, being with people, playing cards, BINGO, quilting, crocheting, and baking.

Survivors include a son: Donald (Dawn) of Loretto, MN, 2 granddaughters: Erin and Morgan Frank of Loretto, 3 brothers: Gordon Sanders of Frazee, MN, Charles "Bill" Sanders and Walter "Frit" Sanders both of Mishawka, IN, and many nieces and nephews. She was preceded in death by her husband, Leonard in 1991, her parents, 3 brothers: Thomas "Les" Cecil, and Harold, and 11 brothers and sisters-in-law.

To order memorial trees or send flowers to the family in memory of Beulah Frank, please visit our flower store.