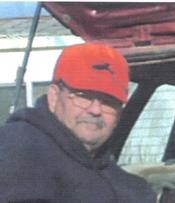 A celebration of life will be held 4-7 p.m., Thursday, August 16, 2012, at the Vergas Event Center. A prayer service will take place at 7 p.m. with refreshments to follow. Furey

Bri was born July 16, 1950, in Detroit Lakes, MN, the 2nd child born to Dale and Vernice (Dullum) Glawe. Bri grew up in rural Vergas on the family's dairy farm. He attended District #116 Country School as a boy and went on to graduate from Perham High School with the class of 1968.

Following high school he went on to attend United Technical Institute of Milwaukee and obtained his degree. He then moved to Norwalk, Connecticut where he worked as an electronics technician.

In 1970, Bri suffered injuries in a motorcycle accident which left him paralyzed. He then moved back to Vergas, where he opened B&B TV which he operated until spring of 1993.
Then, he went back to school at M State in Detroit Lakes where he pursued an accounting degree. He held various accounting positions in the area.

Bri was very active in the community and held several offices. He was a Vergas City Councilman, was the Hobart Township Treasurer for 15 years and even served as the Looney Days Grand Marshall in 1993. Bri's TV shop also served as the social network for many family and friends.

He was an avid hunter and fisherman and enjoyed spending time outdoors with his family and friends. He also loved Nascar, watching the cooking channel, Bri was also an exceptional "chef", and the hunting channel, which was also known by many as the "whisper channel". He was an avid MN sports fan and enjoyed watching the Vikings and the Twins. He was a self-taught gun smith. He had a love for all of God's creatures and took care of many. He also showed concern for others before himself and truly had a kind soul. He never complained about his own hardships, and there was no "can't" in his vocabulary. His nieces and nephews held a special place in his heart and he showed great generosity to each of them.

He was preceded in death by his parents; his sister, Becky Weisgerber and a sister-in-law, Cheryl Glawe.

To order memorial trees or send flowers to the family in memory of Brian Glawe, please visit our flower store.