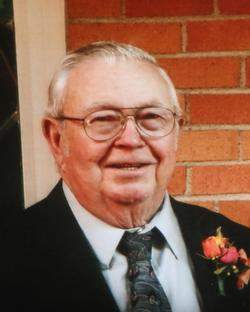 
Cecil was born January 5, 1929, at White Earth, MN, to Cecil and Laura (Lambert) Cook, Sr. He was baptized and confirmed at Most Holy Redeemer Catholic Church in Ogema, MN. Cecil attended elementary school in Ogema and high school in Waubun, MN. When Cecil was 16 years old, he hauled his first load of cattle with his Dad’s cattle truck to Fargo, ND. In 1949, Cecil married Betty Kraker at the Most Holy Redeemer Catholic Church in Ogema. Cecil and Betty moved their 3 daughters and 1 son to Frazee in 1959.


Cecil became the Ogema Constable and Deputy Sheriff of Becker County for the next 8 years. Cecil was also Fire Chief of Ogema during that time. In 1957, he started working for Daggett Truck Line where he drove semi throughout the United States for 13 years. He then became shop foreman until his retirement in 1994.


Cecil enjoyed watching high school sports, especially wrestling and attended as many games and matches as he could. Cecil also enjoyed hunting, fishing, golfing, and playing cards with family and friends. He played over 1,000 games of cribbage with Vic Anderson, George Wokasch and Lyle Dodes. He also enjoyed many card games at the Frazee Care Center.


Cecil was a member of Sacred Heart Catholic Church in Frazee. He was also a member of the Knights of Columbus and the Frazee Lions Club.


Preceding Cecil in death were his parents, Cecil Sr. and Laura Cook; and 1 brother, Dick Cook.


To order memorial trees or send flowers to the family in memory of Cecil Cook, please visit our flower store.