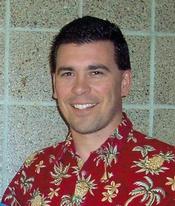 Funeral services will be held 2 p.m., Friday, May 18, 2012, at the Frazee High School with Father Xavier Ilango celebrating. Interment will be made in Sacred Heart Catholic Cemetery. Lunch will be hosted following the service for all to attend. Visitation will be held from 4-8 p.m., Thursday, May 17, 2012, at the Sacred Heart Catholic Church in Frazee with a rosary service to be held at 6:30 p.m. and a prayer service to follow.

Chad was born November 26, 1971, at St. Mary's Hospital in Detroit Lakes, MN, to Ed and Linda (Buschette) Jutz. Chad was baptized into faith at Holy Rosary Catholic Church in Detroit Lakes, MN. He was confirmed in faith at Sacred Heart Catholic Church in Frazee, MN. Chad grew up in Frazee, MN, where he attended school and graduated from Frazee High School with the class of 1990.

He attended Alexandria Technical College where he graduated from the law enforcement program in May of 1992.

Chad was united in marriage to Shantel Germolus on August 22, 1992, at Sacred Heart Catholic Church, where Father Stephen Wagman presided over the wedding.

The couple made their home in Detroit Lakes, MN and were blessed with 4 children: Hailey, Andrew, Matthew and Deven.

Chad had a love of classic and muscle cars and enjoyed time spent in the shop working on, and detailing vehicles. His passion extended to waxing and applying Armor All to anything with wheels; right down to his lawnmower. He was known as "Mr. Fix-it" and was a jack-of-all trades. Chad designed and painted mailboxes that he generously donated to local charities and fundraisers in the community.

He had a great love for children which also showed in his dedication to his church. He was active in release time at Sacred Heart Catholic Church and enjoyed spending time with the kids and cooking for them. He also served as a lector, usher and Eucharistic Minister there. Many parishioners called upon him to fill-in with church duties when they were not able to attend as he rarely said no.

He was a dedicated husband and father who cherished his wife and children.

To order memorial trees or send flowers to the family in memory of Chad Jutz, please visit our flower store.