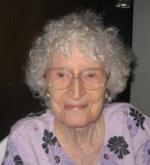 Clare was born on November 27, 1910 to immigrant German minister, Wilhelm and his wife, Martha (Beer) Marth in Hinton, Iowa. Clare was baptized by her father January 15, 1911 and confirmed October 30, 1927. Clare was the ninth of twelve children and experienced the loss of her mother at the age of five. She was married to Ralph Woodall from January 17, 1937 until his death in 1970. She was later married for two years to Gus Weiss of Ottertail, MN. In the course of their marriage, Clare and Ralph moved many times, from Minnesota to California where they operated a Boys Ranch for troubled teens. They operated various other businesses in California, North Dakota, Montana and Minnesota. Locally, they were proprietors of the Sportsman's Center and Loons Nest in Vergas and the Lanterns near Rush Lake.
Clare was very generous and relentless in sharing her faith in Jesus Christ.
Clare will be missed by her Children Frank (Elaine) Woodall and Pamala (Norm) Bietz, her son-in-law Raynold Kratzke; grandchildren Kathy Woodall, Mark (Veronica) Woodall, Michael (Sharon) Kratzke, Joel (Valerie) Kratzke, Richard (Tanzy) Kratzke; great grandchildren Jonathan (Heidi) Kratzke, Anna (Kurt) Hall, Julia (Bob) Isakson, Grace Kratzke, Morgan Laite, Victoria and Jeremiah Kratzke, Jacob and Eric Woodall; one great great grandson, Asher Isakson; plus countless other friends and relatives.
Clare was preceded in death by her parents, two husbands and 11 siblings.

To order memorial trees or send flowers to the family in memory of Clare Weiss, please visit our flower store.