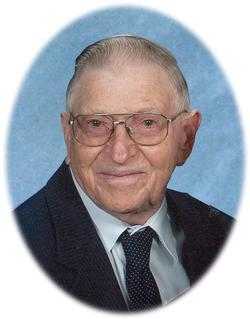 Clarence was born December 3, 1919 at home in Dora Township, the 5th of 11 children born to Otto and Juliana (Potz) Kratzke. He grew up in Dora Township where he attended country school. He continued farming until he was drafted to the United States Army in 1942, where he served in the armored tank division during WWII. His service brought him to France, Germany and even Czechoslovakia. During his service, he was united in marriage to Verna Lachowitzer. The couple married September 4, 1943 at the military base in Leesville, Louisiana. Following his honorable discharge, the couple bought a small dairy farm in Hobart Township near Rose Lake. They had two sons: Gerald and David.

Clarence loved to fish and hunt. Many fond memories were made fishing with Clarence. The family enjoyed fishing the area lakes both summer and winter. Duck hunting was also a family affair; even Verna participated in the sport. Clarence also was an avid wood cutter. No matter the time of year, he always had a substantial supply of split wood on hand.

Clarence was a life-time member of the St. Paul's Lutheran Church - Loon Lake, being baptized and confirmed there. He was a kind and caring man who will be dearly missed by his family and friends.

To order memorial trees or send flowers to the family in memory of Clarence Kratzke, please visit our flower store.