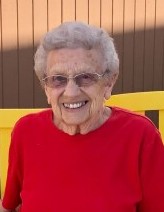 Visitation will be for one hour prior to the service at the church. Interment following service at St. Paul's Lutheran Cemetery Evergreen.

Cydera Lou Branby was born May 22, 1931 in Frazee, Minnesota, the daughter of Otto and Amelia (Bartel) Illg. She passed away Sunday, November 22, 2020 at Sanford Hospital in Fargo, North Dakota.

She was baptized and confirmed in the Lutheran faith at St. Paul’s Lutheran Church Evergreen. Cydera grew up and attended country school in Frazee and graduated from Frazee High School. She continued her education at Moorhead State Teachers College. Cydera taught in the communities of Brainerd, Worthington, and Great Falls, Montana.

On July 7, 1956, she was united in marriage to Garfield Branby at St. Paul’s Lutheran Church Evergreen. To this union four children were born. Cydera and Garfield traveled for many years as Garfield was in the Air Force. She was a stay home mom raising the kids and caring for the house.

Cydera returned to Frazee and substitute taught elementary school until she was 81 years old. She was the treasurer for Silver Leaf Township for over 30 years and was a lifelong member of St. Paul Lutheran Church Evergreen. She enjoyed gardening and raising flowers.

Cydera was preceded in death by her husband Garfield Branby in 2009 and her parents: Otto and Amelia Illg and brother Merle Illg.

To order memorial trees or send flowers to the family in memory of Cydera Branby, please visit our flower store.