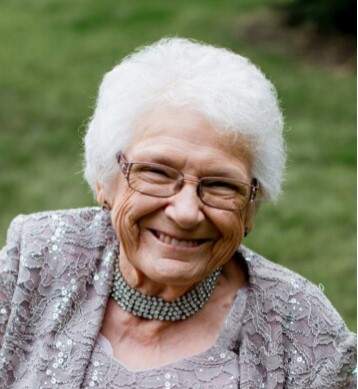 Darlene Fae King, age 82, of Frazee, MN, passed away Saturday, March 3, 2018, at Essentia Health in Fargo, ND, surrounded by her loving family.  Funeral service will be held 11 AM, Thursday, March 8, 2018, at the Frazee United Methodist Church.  Visitation will be held from 5-8 PM, Wednesday, March 7, 2018 at Furey Funeral Home in Frazee with a prayer service to take place at 7 PM. Visitation will continue one hour prior to the service at the church on Thursday.

Darlene Fae (Lundberg) King was born on April 15, 1935 in Holmesville Township, north of Detroit Lakes, MN to John and Ruby Lundberg.  She was the youngest of seven children.  She grew up on a farm and attended country school, until they moved to Frazee.  Darlene graduated from Frazee High School in 1953.  She was united in marriage to George King, on August 8, 1954.  They made their home in Frazee where they raised their three children.

During high school she worked at the Lynn Theatre in Frazee as the Popcorn Girl selling bags of popcorn for five cents.  During her working years, she was employed at Peoples State Bank, Frazee Turkey Plant, Anderson Bus Company and was the Office Manager for King's Standard Oil. Darlene retired after 30 years of service at Frazee Care Center.  George and Darlene co-owned and operated Giant Wash Laundromat with Darlene's Uncle Art Olson.

Darlene was one of the founding members of the Frazee Rescue Squad, past VFW Auxiliary president and spent many years as leader of her children's Campfire and Den Mother for Cub Scouts.  She was very active at Frazee United Methodist Church.

Darlene enjoyed spending time with family and friends.  She loved hosting many holidays and birthday celebrations. Darlene made many wedding and birthday cakes.  She loved cooking for her family and friends.  The more the merrier.  Family members were always calling asking for her recipes to their favorite foods.  She always put everyone before herself, she was a blessing to her family.  She was affectionately known as "Granny" by many people.  Her Halloween cookies were known worldwide.  George and Darlene enjoyed square dancing and playing cards.  She was an avid Minnesota Twins fan.

She was preceded in death by her husband, George; an infant son; her parents; mother and father-in-law; 5 sisters, 1 brother along with their spouses; 1 sister and brother-in-law.

To order memorial trees or send flowers to the family in memory of Darlene King, please visit our flower store.
Open