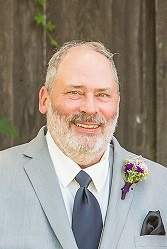 Funeral Mass will be held 11 a.m., Tuesday, November 1, 2016, at Sacred Heart Catholic Church in Frazee, MN. Visitation will begin at 9 a.m., on Tuesday at the church. Military Honors will be provided by the Heart O' Lakes V.F.W Post #7702, Frazee. Burial will be made at a later date.

David was born March 23, 1954, in Detroit Lakes, MN, to Henry and Ruth (Illg) Rethwisch. David grew up in Silver Leaf Township, MN, attending Frazee High School graduating with the class of 1972. Following his schooling, he enlisted in the United States Air Force, then the Air Guard, finally the Navy Seabees. David worked at Snappy's in Detroit Lakes, retiring in 2016.

David was united in marriage to Vickie Teberg at Sacred Heart Catholic Church in May of 1978. The couple had 2 children: Mark and Kris. Vickie passed away July 31, 1993.
David married Catherine Rardin on October 31, 1995, in Detroit Lakes, MN. Cathy added 2 daughters to the family, Renee and Kelsie Hintz.
Later in life, Dave married Linda Mesenbrink. The couple married October 9, 2010 at their home in Frazee. Linda's 3 children were added to the family, Tracie, Robin and Sheila Bellanger.

Dave enjoyed spending time with his family: riding bike, snowmobiling, fishing, hunting, motorcycling, trips to the family farm and taking family vacations. Dave also enjoyed threshing bee, working on his John Deere tractor, tinkering on anything as well as gardening and spending time outdoors. His dogs, Chico and Patch were great companions. He liked listening to music and watching western movies. He loved his family, especially the time he spent with his grandchildren.

Preceding David in death were his parents.

Frazee, MN
Tuesday, November 1, 2016
11:00 AM
To order memorial trees or send flowers to the family in memory of David Rethwisch, please visit our flower store.