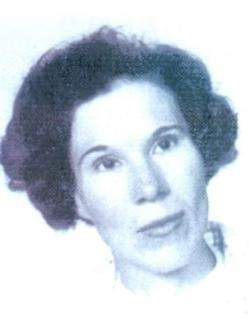 We celebrate the life of Delia Erna Wallace (Poss). She was born on April 3rd, 1928 at home, on her family farm, near Lake Lida, Vergas, Minnesota. She was the third daughter of Erna and Fred Poss. Delia is survived by her older sister Elaine Adsero and preceded by her eldest sister, Alice Arvidson, and younger brother, Gordon Poss. She was baptized and confirmed at St. Paul's Lutheran Church at Loon Lake and graduated from Pelican Rapids High School. Her childhood was filled with helping on the farm, vegetable gardens, canning, cooking, and swimming on Lake Lida. She always had a spirit for travel and adventure. After high school she decided to move to Colorado Springs, Colorado. There she became a Certified Nursing Assistant at The Sisters of St. Francis Hospital in Colorado Springs, and worked much of the time in their Tuberculosis Ward. While in Colorado Springs, she met a distinguished and handsome army sergeant, Robert (Rebel) Wallace, from North Carolina, who was serving at Ft. Carson Army Post. They married on March 12, 1955. Soon after they married, they moved back to Minnesota and purchased a farm adjacent to her family farm on Lake Lida, where they lived for the next 35 years. They had four children, Cheryl, Phyllis, Pam (Renee) and Farron.

Delia was a devoted and loving mother to her four children and a proud grandmother of five, Matthew Scharff, Andrew Scharff, Graham Scharff, Ashley Chandler and Hayden Wallace.
Her life revolved around her family and in later years she accompanied her husband in his trucking business, traveling across the US. Delia's husband, Robert, passed away in 1998. Since that time, she spent summers at her house on Star Lake and winters living near her children and their families in Colorado, California and Washington State. She passed away in San Diego, CA on May 31, 2015, after complications from a stroke.

Delia was always warm, kind and friendly to all. She had a beautiful smile and sparkle in her eyes but her greatest testament in this life, is that she loved and followed Jesus Christ. May God bless her and keep her and give her peace. She will be dearly missed by all who knew and loved her.

To order memorial trees or send flowers to the family in memory of Delia Wallace, please visit our flower store.