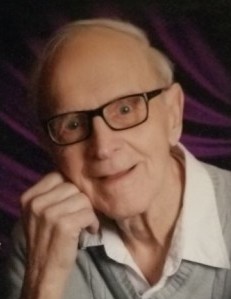 DeLyal Merlin Rue was born September 6, 1925, in Flom, Minnesota to Henry and Maybelle (Gunderson) Rue. He grew up on a farm north of Flom and he was confirmed at Aspelund Lutheran Church near Flom. He attended country school until the eight grade and then had to help on the family farm due to his father’s illness.

In 1960, DeLyal married Ethel Hanson (Rue) in Detroit Lakes, MN.  He was employed by Pepsi-Cola and then drove cattle truck for Daggett Truck Line in Frazee until his retirement.

In 1962, DeLyal and Ethel adopted son Todd (Roxanne).  In 1966 the family relocated to Frazee and they adopted another son Darin.

Ethel Rue passed away suddenly in the winter of 1981.  DeLyal married Eleanor (Ellie) Larson in 1986. They were happily married and made their home in Frazee until his passing.

DeLyal enjoyed ice fishing, playing cards, yard work, visits from family, quiet time and naps; but his favorite past time was scratch-off lottery tickets. DeLyal was a very kind, soft-spoken man who found the good in everyone. He will be greatly missed by his loving family and all who were blessed to know him.

DeLyal was preceded in death by his parents, Henry and Maybelle Rue; sisters: Verna Christenson of Waubun MN, Genevieve Johnson of Flom MN, and his first wife, Ethel Rue of Frazee.

To order memorial trees or send flowers to the family in memory of DeLyal Rue, please visit our flower store.