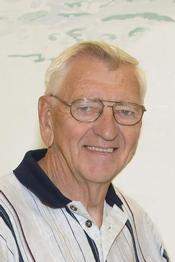 Donald D. "Don" Anderson, 76, resident of Long Lake - Vergas, MN, died Saturday, October 15, 2011 at his home surrounded by his loving family and under care of Hospice of the Red River Valley.

Don was born July 25, 1935, to James R. and Myrtle (Peterson) Anderson in the town of Armstrong, Iowa. They family moved to Blue Earth, MN, where Don graduated from Blue Earth High School.

He was united in marriage to Barbara Jean Evans on April 7, 1956 at St. Peter and Paul Catholic Church in Blue Earth, MN. This union was blessed with 7 children.

Don worked several jobs, eventually taking a job with Minnegasco, a natural gas company based in Mankato, MN, where he worked for 30 years before retiring. The couple and their family made the move to Gaylord, MN, in 1969, when Don was transferred from Blue Earth. He joined the volunteer fire department which he truly enjoyed and served for 24 years.

Don also loved bowling and belonged to the men's and a couple's league for a number of years. Don liked dancing with his wife, Barb, which they did for many years. He also enjoyed teaching some of his children to dance. He loved fishing, and hunting. He was very active in the Church, where he enjoyed attending mass and being a member of the Knights of Columbus.

In 1996, Don and Barb made their home in Vergas, MN, following Don's retirement. He loved working on his lake home and having the family come to visit. There, they enjoyed many campfires where memories were made and stories were told.

Don was a dedicated and loving husband, father, grandfather, great grandfather and friend. He will be greatly missed by all who knew him.

He was preceded in death by his parents; infant brother, Roger and brother, Marlin "Andy" (Mavis) Anderson.

To order memorial trees or send flowers to the family in memory of Donald Anderson, please visit our flower store.