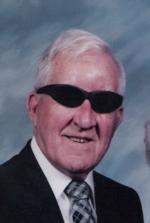 Hub was born November 24, 1925 in Becker County to Harry and Elizabeth (Daubenspeck) Holmer. He was baptized and confirmed at Bethlehem Lutheran Church in Frazee. He attended rural schools in the Frazee area. He farmed with his father and brothers, harvested ice in Detroit Lakes and put up electric poles in Carrington, ND before being drafted into the Army and serving in the Korean War. He was wounded and lost his eyesight in May of 1951. He spent time at Walter Reed Army Hospital in Washington D.C. and then at the Veterans Hospital in Hones, IL. for occupational therapy. He returned to the farm after his discharge and raised Muscovy ducks and laying hens. Hub helped on the farm by milking cows and hauling bales. He loved to hunt and fish and acted as mentor and ears for his younger brothers and sister when they started to hunt. He enjoyed playing cards with his friends. He married LaVern (Ziolkowski) Peterson in May, 1964 and they made their home in Frazee.

He was preceded in death by his parents; 5 brothers: Leonard, Vernon, Elmer, Robert and Jerome; and one sister, Evelyn.

To order memorial trees or send flowers to the family in memory of Donald Holmer, please visit our flower store.