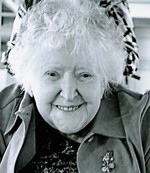 The funeral services for Dorothy Mildred Flatau, 92, Frazee, MN, will be held Friday, March 13, 2009, at 11 a.m. at Bethlehem Lutheran Church in Frazee, MN with Reverend William Aufdenkamp officiating. Burial will follow the service at Lakeside Cemetery in Frazee. Visitation is scheduled for Thursday, March 12, 2009, at Furey Funeral Home in Frazee, from 4-8 p.m. with a prayer service at 8 p.m., and also one hour prior to the service at the church. Dorothy died on Tuesday, March 10, 2009 at the Thomas Home II in Perham, Minnesota.

Dorothy Mildred Franklin was born September 30, 1916 in Hobart Township near Frazee, MN to John Sr. and Agnes (Barfuss) Franklin. She attended and graduated from Frazee Public Schools. On July 9, 1936, Dorothy married Martin Flatau in Sisseton, SD and were married for 60 years. During that time, they farmed in Hobart Township until retirement. Dorothy lived on the farm until 2006 when she moved into the Thomas House II in Perham, Minnesota where she received their loving care until the time of her death.

To order memorial trees or send flowers to the family in memory of Dorothy Flatau, please visit our flower store.