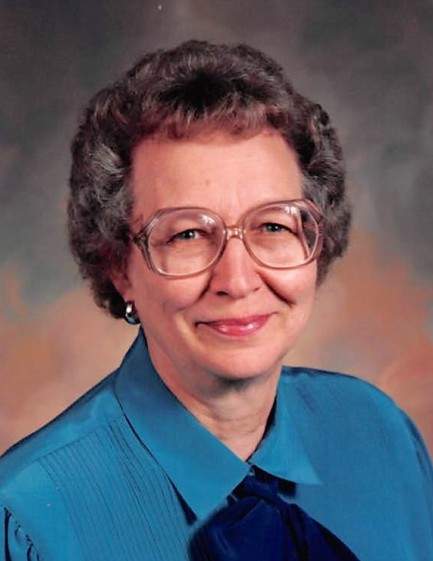 Edna Harriet Ketter was born September 13, 1931 at the Frazee Hospital in Frazee, MN, the daughter of Edward and Katherine (Lachowitzer) Ketter. She passed away, age 86, Monday, August 20, 2018 at the Frazee Care Center.

She grew up and attended school in Frazee graduating with the class of 1949. Edna continued her education at Moorhead State Teachers College receiving her two-year associate degree and would later return to complete her bachelor of arts degree in education from Moorhead State University.

Edna taught school in Dilworth and Staples before returning home to teach third grade in Frazee.  In 1990, she received the Teacher of the Year award in Frazee and Edna retired from teaching after a 38-year career in 1993.

She was a member of the ADK society and stayed active with the H.O.L. Genealogy and Becker County Historical Society’s. Edna was involved with coordinating the Frazee all school reunions and was a past Grand Marshall of Frazee’s Turkey Days. She enjoyed scrapbooking, stamp collecting, bowling, and was a MN Twins fan. Her true love was educating children both at school and within her family. Edna would take educational vacations with her nieces and nephews to Montana, California, and trips to the mouth of the Mississippi River.

Edna is survived by her siblings: Maryann Moore of Great Falls, MT; Kenneth (Joan) Ketter of Frazee; 12 nieces and nephews; and several great-nieces and great-nephews.

She was preceded in death by her parents: Edward and Katherine Ketter; brother: Rex Ketter, passed away June 7, 2018; and brother-in-law: James Moore, passed away September 13, 2017.

Memorial Service for Edna will be 2 p.m. Sunday, August 26, 2018 at Bethlehem Lutheran Church in Frazee, MN.

Following the memorial service and lunch, interment for Edna and Rex will be held at Lakeside Cemetery.

To order memorial trees or send flowers to the family in memory of Edna Ketter, please visit our flower store.
Open