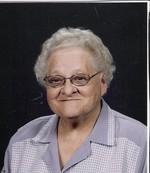 Edna Leona Marks, age 90, of Frazee, MN, passed away peacefully on Saturday, January 30, 2010 at the Frazee Care Center.
Edna was born April 9, 1919 in Gorman Twp., Otter Tail County, MN to Herman and Julia (Ziegler) Schultz. She grew up and attended country school through the 8th grade. Following her schooling, Edna did domestic work and also worked as a waitress in a local restaurant. Edna supported the war effort working for a year in the shipyards of Portland, Oregon. She returned home to care for her ailing mother. Edna was united in marriage to Richard Marks on September 18, 1946 at Bethlehem Lutheran Church in Frazee, MN. This union was blessed with 4 children: A.J., Ron, Steven, and Barb. The family operated a dairy farm in Burlington Township where Edna was a devoted wife and mother. Edna was very involved at Bethlehem Lutheran Church where she was a member of the ladies aid, guild, and also participated in quilt making. When Edna was not busy with farm duties, she enjoyed bird watching and tending to her flower gardens. She also planted large vegetable gardens that she nurtured into fruitful abundance to can for the needs of her growing family. Above all, Edna devoted her life to caring for her family who she loved with all her heart.
Edna is survived by 3 sons: A.J. (Carolynn) of Eagan, MN, Ron (Verna) of Frazee, MN, Steve (Connie Kundert) of Sioux Falls, SD; 1 daughter, Barb (Lee) Bouck of Bend, OR; 9 grandchildren; 5 great grandchildren; 1 brother-in-law, Lawrence Marks; and 1 sister-in-law, Arlene Schultz.
She was preceded in death by her husband, Richard in 2004; her parents; 13 siblings; 1 granddaughter, Kelly Marks; and one grandson, Jamis Marks.
Funeral services will be held 11 AM Saturday, February 6, 2010 at the Bethlehem Lutheran Church in Frazee, MN with Rev. Bill Aufdenkamp officiating. Visitation will be held 5-8 PM Friday, February 5, 2010 at the Furey Funeral Home with a prayer service at 7 PM. A luncheon will be hosted following the service for all to attend. Interment will be made in the Bethlehem Lutheran Cemetery in Frazee. Funeral arrangements have been entrusted to the Furey Funeral Home of Frazee.

To order memorial trees or send flowers to the family in memory of Edna Marks, please visit our flower store.