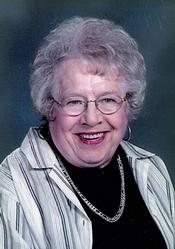 Edna Violet Aschnewitz was born July 10, 1929 in Perham, MN to Herman and Emilie (Marks) Aschnewitz. She was raised and educated in Dent, MN. On December 25, 1947, Edna was united in marriage to Dorvin Schultz in Dent, MN. They lived on the family farm where together they operated Schultz's Fur Farm and raised their family. Edna semi retired in 1976 and they built their retirement home near Loon Lake by Vergas, MN. In 1984, Dorvin died of cancer. Edna kept herself busy and was proud to say she earned her GED in 1985. She volunteered her time to her church, participating in bible study groups and sharing her many talents in sewing, embroidery and needle point. She also enjoyed singing, dancing, reading, canning, and gardening. Family was most important to Edna and she cherished time spent with her grandchildren, having them for an over night visit, to watching them participate in activities and succeed in life.

She is preceded in death by her parents, husband Dorvin (1984), two sisters: Dorothy and Delores and one brother, Raymond.

To order memorial trees or send flowers to the family in memory of Edna Schultz, please visit our flower store.