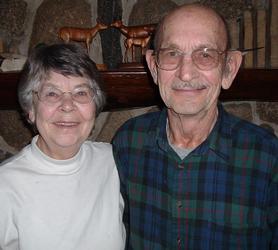 
Bad Medicine Lake residents Ed and Bonnie Strohmeier passed away on Tuesday, Sept. 8 and Sunday, Sept. 6, respectively. Ed was 93 years of age and Bonnie was 87.


Upon graduation from high school, Ed joined the Civilian Conservation Corps “CCCs” and was stationed in the Iron Range region in Minnesota, followed by travel to Sitka, Alaska and Las Vegas, Nevada where he worked as an electrician. When World War II started, he enlisted in the U.S. Navy, serving in the South Pacific. He was honorably discharged from the Navy as a Lieutenant Junior Grade with a Purple Heart.


Following the end of the war, Ed returned to Minneapolis where he met and married Bonnie Benson.  They were united in marriage on March 5, 1947. They shared the next 68 years together. Ed started his career as an electrical contractor for Pearson-Wilcox Electrical Co., Minneapolis, MN. Bonnie was a homemaker. They resided in Minnetonka, MN.  In 1957, they bought a hobby farm in Wayzata, MN, raising, breaking and showing horses. They enjoyed the farm life so much that in 1962 they purchased a farm in Frazee, MN raising cattle and horses.  In 1973 they decided to downsize purchasing a grain farm on the Ponsford Prairie and building their retirement home on Bad Medicine Lake where they have resided for the past 42 years.


The two of them enjoyed swimming/fishing in the lake and walking in the woods throughout the years. In summers, they walked two miles to retrieve the mail. In the winter they were avid cross-country skiers on the trails they build in the woods behind their home. Dancing was a lifelong passion whether it was on the deck, in the living room or various dance halls in the area.  Ed enjoyed tinkering with machinery and hunting ducks and geese. Bonnie enjoyed gardening, woodcarving of birds and animals, and football-Go Vikings! They both collected sap in the spring to make maple syrup. They spent many hours reading and doing jigsaw puzzles.


Ed and Bonnie were preceded in death by Son, Gary and are survived by their children Lynn (Steve) Lindow of Ponsford, MN and Fred (Ruth) Strohmeier of Fifty Lakes, MN 4 Grandchildren, 7 Great Grandchildren and many Nieces, Nephews and their children.


Bonnie was preceded in death by her parents and 2 sisters.
She is survived by her sister Faye Shervey of Minneapolis, MN and her brother Ray (Sandy) Benson of Orlando, FL.


Ed was preceded in death by his parents, a brother and a sister.  He is survived by his Brother-in-Law Ralph (Pat) Eide, Minneapolis, MN.


A Celebration of Life will be held in their honor on Saturday, Oct. 3 from 2 to 5 pm at the Furey Funeral Home, Frazee, MN.


To order memorial trees or send flowers to the family in memory of Edward Strohmeier, please visit our flower store.