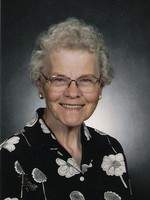 Elaine Harriet Diederichs was born on December 7, 1924, to Henry A. and Millie (Fresonke) Diederichs on the family farm near Dent, MN where she grew up. She attended country school in Edna Township and graduated from Perham High School.
After graduation, Elaine attended teachers' training in Park Rapids, MN and taught at several rural schools in Otter Tail County. She was confirmed at United Church of Christ in Perham, MN and was married at the same church on June 1, 1947, to Walter Berend. Walter and Elaine moved to California for a short time before returning to Minnesota to live near Detroit Lakes, moved onto Two Harbors and eventually settled in Vergas in 1959 where they lived until the present time. She worked for the Perham School District from 1967 - 1989 as the High School Secretary and thoroughly enjoyed her time in school where she made many friends. Elaine liked to spend time with her family and friends, playing cards and Solitaire, reading, and loved to talk on the telephone.

She is survived by her husband Walter; children Rebecca (Darrell) Nielson and Mark (Lee) Berend; grandchild Meredith Nielson; other extended family and the family pets, Daisy and Tux.

Preceding her in death are her parents Henry A. and Millie (Fresonke) Diederichs.

To order memorial trees or send flowers to the family in memory of Elaine Berend, please visit our flower store.