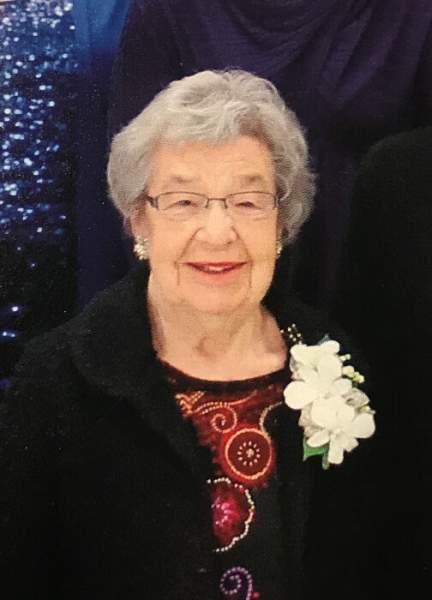 Elizabeth “Betty” Ann Iten Dretsch was born to the parents of Madeline and Fredrick Iten on February 2, 1923 in St. Paul, MN.

As a child, Betty attended the Cathedral School of St. Mary in Fargo. She graduated from Frazee High School in 1940. She then attended Business School. Betty moved to Washington DC during WWII and became a secretary for a general at the Pentagon.

She married Lloyd Dretsch on December 29, 1942, in Washington DC. After the war, they settled in Frazee, Minnesota, where their marriage was blessed with six children. They were married for 69 years.

Betty worked at Frazee High School in the library for over 25 years, she loved her work and the students. She was a member of the Christian Mothers, VFW Auxiliary, Frazee Golf Course and Card Club, and the Red Hats Society. Betty loved learning and had an inquisitive mind. She was an avid reader and enjoyed playing cards, gardening and traveling.

Her passion was to embrace her Catholic faith. She instilled in her children a sense of Christian duty and responsibility by the example she set. She taught her family to love, respect and appreciate the goodness in people. Her strength of character set a solid structure for the family. Her love and loyalty to family was her most significant gift. She had a strong and serious personality with a humorous and witty undertone, which she expressed with a smile. She will be sincerely missed by her family and friends.

To order memorial trees or send flowers to the family in memory of Elizabeth "Betty" Dretsch, please visit our flower store.