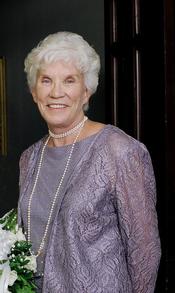 A memorial service for Elsie will be held 11 a.m. Monday, September 19, 2011, at Bethlehem Lutheran Church with Rev. William Aufdenkamp officiating. Interment will be made in the Inman Cemetery in rural Deer Creek, MN. Lunch will be hosted at the church following the service for all to attend. Visitation will be held from 5-8 p.m. Sunday, September 18, 2011, at Furey Funeral Home in Frazee, MN with a prayer service to take place at 7 p.m.
Elsie was born May 27, 1931, at the family farm in rural Wolf Lake, MN. She was the eldest child born to Levi and Helene (Oja) Jampsa. She grew up and completed her education in New York Mills. Following her schooling, Elsie was united in marriage to Richard Palan on July 14, 1948 in Miles City, Montana. This union was blessed with two sons, Rick and Randy. The young couple made their home in Grand Junction, CO. While living in Grand Junction, Elsie took a job at the local TV and Radio station, KREX. She served as the station's copy writer, hosted an on-air commercials and TV shows and also had a live radio show where she announced community happenings and events. The couple later moved to Lakewood, CO, near Denver. Elsie stayed busy helping with the office and management side of their business, Palan Masonry. The masonry trade also took them around the United States; stopping in many major cities where they applied marble to high-rise buildings.

During their travels, Elsie greatly enjoyed attending yard sales, church bazaars and shopping at the local book stores, where she purchased cook books. At one time, her collection included more than 1000 cook books. Elsie was an avid reader and had a passion for knowledge. She educated herself though her zest for books and reading.

Following her husband Dick's retirement from the masonry trade, the couple found a "fixer-upper" home in rural Deer Creek, MN, which became a daily 9 to 5 job for them. They started nearly every morning making renovation plans over coffee, then set to work. Upon completion of their home improvements, Dick and Elsie sold the house. They bought their retirement home in Frazee, MN, and also stayed busy updating the house to their liking. Elsie's life was greatly saddened by the passing of her husband, Dick in 2000.

Elsie was a member of Bethlehem Lutheran Church in Frazee and also served on the ladies guild.

She was preceded in death by her husband, Dick in 2000; son, Randall; 1 sister, Gloria Scheuerman; and brother-in-law, Robert Kuenzel.

To order memorial trees or send flowers to the family in memory of Elsie Palan, please visit our flower store.