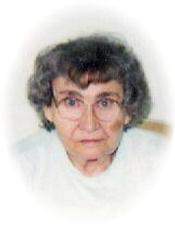 Emma Dixon, age 83, of Lake Park, MN, passed away Tuesday, April 23, 2013, at Sunnyside Care Center in Lake Park.
A memorial service will be held 11 a.m. Saturday, April 27, 2013, at Holy Rosary Catholic Church in Detroit Lakes. Visitation will be held one hour prior to the service at the church on Saturday. Lunch will be served following the service.

Emma was born in Aitkin, MN to Clarence and Florida (Graton) Courier on December 4, 1929. She grew up in Aitkin where she met and married William Dixon on August 3, 1952.

They moved around a lot between Iowa and Minnesota because Bill was a truck driver. They eventually settled in Detroit Lakes, MN. She stayed at home until 1970, when she went to work at the Swift Turkey Plant where she worked until retirement. Emma was a loving mother and grandmother who loved anything cute. Emma was in Sunnyside Care Center for the last ten years. She became confused, but never lost her love of babies. She would spend her days singing hymns and laughing and smiling at anyone who stopped to visit.

To order memorial trees or send flowers to the family in memory of Emma Dixon, please visit our flower store.