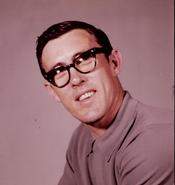 Ernie was born September 7, 1938, at home in McDonald County, Missouri, to Louis and Dorthy (Krueger) Arnold. Ernie grew up in Arizona, eventually moving to Los Angeles, CA. He worked as a maintenance machinist for several companies in Los Angeles.

He was united in marriage to Darcus St. Aubin on June 29, 1962, in Las Vegas, Nevada. This union was blessed with two sons, Robert and Gerald. The couple made their home in Frazee, MN, in 1974. Ernie gained employment with Snappy Company where he worked until his retirement.

Ernie's passions were Harley-Davidson motor cycles, Chevrolets and classic cars. He loved to go to the "Back to the 50s" at the St. Paul fair grounds and also to travel with his wife and many friends.

He was preceded in death by his parents; and two nephews.

To order memorial trees or send flowers to the family in memory of Ernest Arnold, please visit our flower store.