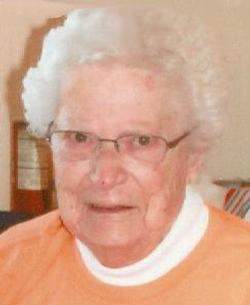 Esther Mitchell passed away January 21, 2014 at the age of 93 at the Frazee Care Center with her children by her side.

Esther was born March 14, 1920 to Louis and Ella Johnson in Huron, South Dakota. Esther moved with her family to what Esther lovingly called the Golden Ridge Addition of Fargo, North Dakota where she grew up and received her education. Her family moved to rural Ogema, MN where Esther helped her mother with her eight brothers and sisters.

Esther married Merle Mitchell on February 28, 1949 in Callaway, MN. Esther and Merle lived and raised their family in Frazee. Merle died May 1, 1980.

Esther was a member of Bethlehem Lutheran Church in Frazee and an active member for many years in the LWML.

Most of all, she enjoyed her family especially being able to host in her home her children and grandchildren for holiday meals until she moved to the Care Center in 2012.

To order memorial trees or send flowers to the family in memory of Esther Mitchell, please visit our flower store.