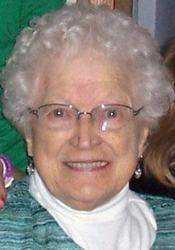 Ethel Anna (Holmer Gotschy) Maves, 88, formerly of Frazee, MN, passed away peacefully, with her daughter at her side, Saturday, April 14, 2012 at Emmanuel Nursing Home in Detroit Lakes, MN. A Mass of Christian burial will be held Thursday, April 19, 2012, at 11 a.m., at Sacred Heart Catholic Church in Frazee, MN. Burial will follow the service at the church cemetery. Visitation is scheduled for Wednesday, April 18, 2012, at Furey Funeral Home in Frazee from 5-7:30 p.m., with a prayer service at 7:30 p.m. Visitation will continue one hour prior to the service at the church. To leave on-line condolences, visit www.fureyfh.com.

Ethel Anna (Holmer/Gotschy) Maves was the daughter of Harry and Elizabeth (Daubenspeck) Holmer, born on February 1, 1924. She attended rural schools in the Frazee area. Her first job was as a cook at Thompson Ice Cream Parlor in Detroit Lakes, MN. She was a good cook and made many delicious pies.

She married Lawrence Wenzel Gotschy on June 25, 1946. They lived in Frazee. Lawrence passed away July 9, 1980. Ethel did daycare in her home for many years. She then went on to work at the Frazee Care Center when it opened. She later worked for Emmanuel Nursing Home and after that she became a Home Health Provider.

Ethel was a very good seamstress, sewing for many people and making wedding dresses for her sisters. She enjoyed being close to her family: Elaine, Sheila (Norman) Bakke and great-granddaughters Marissa and McKenzie. She will be missed by many.

To order memorial trees or send flowers to the family in memory of Ethel Maves, please visit our flower store.