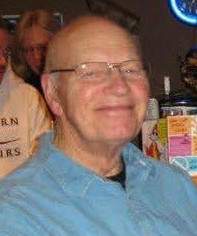 He was born to parents Frank and Ann (Joachim) Ulschmid, on October 14, 1932 in Frazee, MN and graduated from Frazee High School in 1952.   Due to his outstanding sports achievements he was inducted into the Frazee High School Hall of Fame in 2016.  On June 7, 1958 the all star athlete married his greatest cheerleader and fan, Connie Fay Flatau of Frazee, MN.  A marriage bound by faith and love. Together they raised their children at their farm outside of Frazee.

Gene loved and adored his wife, Connie. His children, grandchildren, and great grandchildren were not far behind. He also enjoyed attending sporting events and musicals, traveling to Europe, the farm life, wood working, singing in the church choir, watching birds, leisurely drives, donating blood, workouts, massages and the sauna at the PACC, his wife’s cooking, sweets, and meeting new people.  In fact, if he didn’t already know you he would make sure he did before you were out of his site.

He was preceded in death by his wife Connie, his children: Trent and Trisa, his parents: Frank and Ann Ulschmid, his brothers Wilfred, Peter, Duane and his sister’s: Theresa Nechan, and Geraldine Schmit, along with Connie’s parents: Martin and Dorothy Flatau.

A funeral service will be held for both Connie and Eugene Ulschmid at 11:00 AM Saturday, November 21, 2020 at St. Henry’s Catholic Church in Perham, MN.  We will be following the recommended CDC guidelines regarding COVID-19.

In lieu of flowers, donations may be made to the Alzheimer’s Association, The American Red Cross or to your local blood drive. To share condolences online, visit www.fureyfh.com

To order memorial trees or send flowers to the family in memory of Eugene Ulschmid, please visit our flower store.