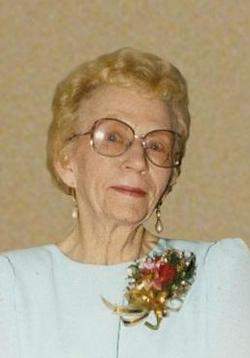 Evelyn Lawrence Thomas, age 93, of Frazee, MN, passed away January 13, 2015, at the Frazee Care Center under the care of Red River Valley Hospice.

A Mass to celebrate the life of Evelyn will be held at 11:00 a.m. at Sacred Heart Catholic Church in Frazee on Monday, January 19, 2015, officiated by Msgr. Timothy McGee.
Relatives and friends are invited to a visitation between 10:00 a.m. and 11:00 a.m. on Monday at the church.

Evelyn was born on June 6, 1921, in Frazee to Herman and Amelia (Marks) Aschnewitz.
She was the eldest of 10 children. She grew up in the Dent area on a farm and was educated in a rural school house nearby. On February 20, 1939, she married Kenneth Lawrence in Red Lake, MN. They lived in Red Lake, Grygla-Goodridge on a farm before moving to Frazee in 1953 where Ken was employed by Daggett Truck Line. Ken and Evelyn had 4 sons and 1 daughter. Evelyn started working at the Frazee Bakery in 1966 and later the restaurant in Frazee. She began working at Gibson's, later called Pamida until her retirement. Evelyn was a member of Sacred Heart Catholic Church, Christian Mothers and spent a lot of time at church serving funerals, etc. living only 1 block from church. Evelyn lost her husband of 54 years in April, 1993. While attending a grief support group, she met CP (Phil) Thomas, a longtime farmer living on Wymer Lake. They married in 1994. She enjoyed playing cards, gardening, dancing, music, sewing, knitting, crocheting, and some traveling. She always felt fortunate to have 2 good men in her life. In 2010, she moved to the Frazee Care Center and resided there until she was escorted by the Holy Spirit to the heavenly kingdom.

Preceding her in death: husband, Kenneth Lawrence; 2 sons: Rolland and Marvin; 4 siblings, Raymond Aschnewitz, Delores Flatau, Dorothy Robinson, and Edna Schultz.
Evelyn was a very devoted wife and mother and will be missed for her quick wit and saying what was on her mind. The family would like to acknowledge and thank the Frazee Care Center for their attentive care.

To order memorial trees or send flowers to the family in memory of Evelyn Thomas, please visit our flower store.