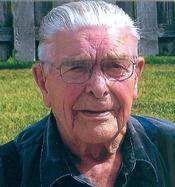 Frederick Henry "Fred" Tate Sr., age 90, of Frazee, MN, passed away unexpectedly on Monday, March 12, 2012, at the Frazee Care Center Assisted Living.
Funeral services will be held 1 p.m., Monday, March 19, 2012, at St. Paul's Lutheran Church in Evergreen, MN. Interment will be made in the St. Paul's Lutheran Church Cemetery. Lunch will be hosted following the service for all to attend. Visitation will be held from 4-7 p.m., Sunday, March 18, 2012, at the Furey Funeral Home in Frazee with a prayer service to take place at 6:30 p.m. Visitation will continue one hour prior to the service at the church on Monday.

Fred was born July 7, 1921, in Winona, MN, the eldest son born to Henry and Reata Mae (Bundy) Tate. He was baptized and confirmed at Faith Lutheran Church at Winona.

As a boy, Fred attended school and worked some of his youth for his grandparents, the Bundy's in Wisconsin on their truck garden, riding bicycle back and forth each day. When he was 17, he joined the C.C.C. at Lake City, MN, where he was trained in heavy equipment and also was encouraged to finish his high school studies; which he did, graduating from Lake City High School.

He was transferred to the Fergus Falls C.C.C. camp. He met the love of his life there, Charlotte Cassel. He was in the C.C.C camp for 2 years. When he resigned, he proposed to Charlotte on December 8, 1941. They were married February 1, 1942, and had 69 A½ years of married life. They made their home in Lakeville for a time, where they worked checking pumps for a company. He also drove truck for Gamble Robinson, cut ice on Lake Winona, and the Mississippi river. They also farmed in 3 locations around Winona, last on Stockton Ridge. There were 5 children born to this union between 1943 - 1952.

Fred loved hunting the hills, and taught Hank how to hunt there. They moved to the Frazee area in 1959, where Fred farmed and drove for Daggett Truck line occasionally. He and Charlotte joined N.F.O., and worked hard to get a price for their fellow farmers. He worked for N.F.O. for many years, retiring in 1995.

Fred and Charlotte did a lot of traveling and some genealogy along the way. They found some lost family in Valentine, NE. He enjoyed traveling to family reunions. He enjoyed fishing the area lakes and spending time with his family.

He was a member of St. Paul's Lutheran Church, Evergreen since 1959.

Fred was preceded in death by his parents; wife, Charlotte in 2011; and 2 brothers: Robert and Allen.

To order memorial trees or send flowers to the family in memory of Frederick Tate Sr, please visit our flower store.