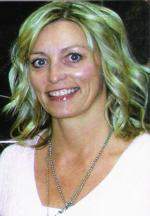 Gaylene C. Smith, 44, Frazee, MN, died Thursday, June 3 at her home under the care of Hospice of the Red River Valley.Funeral services will be 2:00 PM Tuesday, June 8 at Bethlehem Lutheran Church in Frazee, Reverend William Aufdenkamp, officiating. Friends may call 4:00 - 8:00 PM Monday at Bethlehem Lutheran Church. There will be a prayer service at 7:00 PM Monday at the church.

Gaylene C. Smith was born January 1, 1966 in Fosston, MN to Donald and Janet (Jordahl) Lewis. She was raised and educated in Bagley, MN, graduating from Bagley High School in 1984. Following graduation, she attended Moorhead (MN) State College where she was a member of the Vollyball Team. She moved to incinnati, OH where she worked as a nanny and attended DeVry Institute where she took her travel agents training.
Gaylene was united in marriage to Randy Smith July 9, 1988 in Frazee, MN. They lived in Minneapolis where she worked as a travel agent for Carlson Companies 1988 - 1993. She operated a day care 1993 - 1995. They moved to Frazee in 1995 and Gaylene worked for Travel/Travel in Detroit Lakes 1995 - 1999. She operated Travel, Inc. from her home 1999 - 2002 and returned to Travel/Travel where she worked until ill health forced her retirement.
Survivors include her husband, Randy of Frazee; 3 daughters: Kayla, Kristina and Katie all at home, her mother: Janet Jordahl of Moorhead, MN, 2 sisters: Jennifer (Bill) Anderson of Moorhead; Karmen Lewis of Detroit Lakes; a brother: Francis Lewis of Glyndon, MN, her mother-in-law: Leona Smith of Frazee, MN.
She was preceded n death by her dad abd her father-in-law: Tony Smith.

To order memorial trees or send flowers to the family in memory of Gaylene Smith, please visit our flower store.