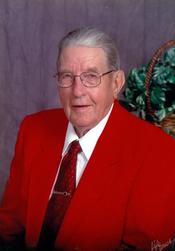 Gordon E. Sanders, 99, longtime Frazee burinessman, died Sunday, January 5 at Essentia Health in Fargo, ND. Mass of Christian Burial will be 11:00 AM Thursday, January 9 at Sacred Heart Catholic Church in Frazee.
Friends may call 4:00 - 7:00 PM Wednesday with a prayer service at 7:00 PM at Furey Funeral Home in Frazee. The visitation will continue 1 hour prior to the Mass at the church on Thursday.

Gordon Elvin Sanders was born December 1, 1914 in Deer Trail, Colorado to George and Elida (Pederson) Sanders. He moved with his family to Chandler, MN in 1915 and to rural Frazee in 1922. Gordon was educated in rural Frazee Schools and, upon completion of his education, he worked for the Civilian Conservation Corps in Peck, MT. He returned to Frazee where he and his brother, Les started Sanders Brothers Oil. He was united in marriage to Irene Anderson in 1937 in Evergreen, MN. They leter divorced. He was united in marriage to Bernice Martineau November 17, 1942 in Lincoln, NE. He served with the U. S. Navy from October 13, 1942 to October 9, 1945. Following his discharge, he and Bernice moved to Frazee where they spent 52 years of married life together. Bernice died March 9, 1995.

Gordon was the first correspondent to do the Frazee news on KDLM Radio, he and Marvin Daggett were the first co-chairmen of Frazee Turkey Days which started in 1954, he served as a substitute rural mail carrier for the Frazee Post Office for 15 years, served as a Becker County Commissioner for 12 years, was on the Frazee City Council for 5 years and was co-owner of M & S Furniture in Frazee. He also served on the boards of the Northwest Petroleum Association, the Ogema State Bank and he built the building that houses the funeral home and post office in Vergas, MN. He was a priod charter member of V.F.W. Post 7702 and served on the Sacred Heart Parish Council.

Survivors include 4 daughters: Gladyce (Doug) Nielsen of Grand Junction, CO, Joyce Clarin of Fargo, ND, Judith (Sverre) Bjerkeskaug of Ski, Norway, Janet (Troy) Sanders of Fargo, ND, 3 sons: Gary of Rensselaer, IN, Roger (Noreen) of Frazee, James "Jimmy Joe" of Chicago, IL, 19 grandchildren, 33 great grandchildren, 11 great-great grandchildren, 2 brothers: Charles and Walter both of Mishawaka, IN along with many nieces, nephews and cousins. In addition to his wife, Bernice, he was preceded in death by a sister, Beulah Frank and 3 brothers:Les, Harold and Cecil, a brother-in-law: Gary Clarin. Memorials are preferred to the V.F.W. Flag project.

To order memorial trees or send flowers to the family in memory of Gordon Sanders, please visit our flower store.