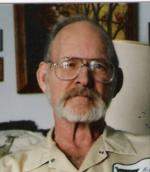 Harry Everett Huddleston
Harry "Hud" E. Huddleston, 81, was born June 26, 1929, to Everett C. and Hazel L. (Reigle) Huddleston in Brunswick, Nebraska. He went to be with his Savior on September 9, 2010.
Harry lived in Laurel, NE throughout his childhood. As a teenager, he began driving a gravel truck and went on in later life to be successful in several lines of work including railroad workman, heavy equipment operator, lineman, and city law enforcement officer. He was an Army Air Cadet in his teens, later serving his country by enlisting in the U.S. Army during the Korean Conflict attaining the rank of sergeant and was honorably discharged from the 110th Infantry Regiment in 1954.
The most significant decision of Harry's life was to receive the Lord Jesus Christ as his savior. While faithfully attending church in Wayne NE, he met his pastor's daughter, a young widow with five children, Charlotte (Steinkamp) Huston. They fell in love, were married, and a daughter was born to this union. In 1966, Harry moved his family to Vergas, MN where he and Charlotte owned and operated a fishing resort on Loon Lake. A few years later, Harry began working for Hanson's Plumbing & Heating, Inc. of Vergas and was a loyal employee for over 30 years.
As a young man, Harry was a pilot and owned two airplanes. He also enjoyed owning several motorcycles. Among his many other interests were trains, hunting, fishing, and target practicing. He often enjoyed these hobbies with his children. He was an Endowment Life member of the National Rifle Association. For several years, he and Charlotte enjoyed hiking through all 65 Minnesota State parks annually. He faithfully attended the Perham Community Church.
Among those who mourn his passing are his wife of 49 years, Charlotte Huddleston, Vergas; six children Rich (Gloria) Huston, Vergas; Saunny (Jim) Jordan, Overland Park, KS; Judy (Don) Hermann, Streamwood, IL; Shari (Bob) Allen, Piqua, OH; Steve (Marcia) Huddleston, Vergas, and Shana (Harry) Tate, Menahga; one brother Paul (Joan) Huddleston, Laurel, NE; one sister Sharon (Gerald) Grimms, Wayne, NE; 15 grandchildren, and 16 great-grandchildren. He was preceded in death by his parents.
Harry was deeply loved as a husband, father, brother, grandfather and friend and will be greatly missed by all who knew him.
Funeral services will be held 11 a.m. Monday, September 13, 2010 at the Perham Community Church with Pastor Tom Mitchell officiating. Interment will be made in the Sybil Lake Cemetery near Vergas. Military honors will be conducted by the Heart of Lakes VFW Post #7702. Visitation will be held from 4-7 p.m. Sunday, September 12, 2010 at the Furey Funeral Chapel in Vergas.

To order memorial trees or send flowers to the family in memory of Harry Huddleston, please visit our flower store.