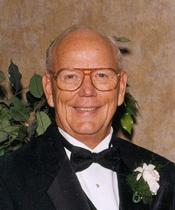 James A. "Jim" Marcy, age 82, of Vergas, MN, formerly of Moorhead, MN, passed away under the care of Hospice of the Red River Valley at the Frazee Care Center on Monday, December 10, 2012.

Jim was born in Frazee, MN, on August 25, 1930. He attended school in Hunter, ND, and graduated from Frazee High School.

On October 2, 1949, Jim married Donna Rein and they were blessed with 5 children. Jim was foreman at Manchester Biscuit Company in Fargo until the plant closed in 1959. He bought Justin Strand Insurance Agency in Comstock, MN, and changed the name to Strand and Marcy Insurance.

While living in Moorhead, Jim served on the Moorhead City Council. They later moved to Rose Lake near Vergas. Jim and his wife, Donna retired in 1992.

Jim married Geraldine Baer in 1997 and 5 children were added to the family.

Jim enjoyed hunting, fishing, golfing, and playing bridge. He was very generous and had many friends.

To order memorial trees or send flowers to the family in memory of James Marcy, please visit our flower store.