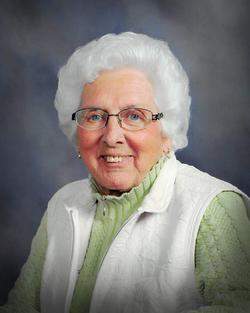 Funeral services will be held 11 a.m., Friday, September 2, 2016, at United Methodist Church in Vergas, MN.   Visitation will be held from 5-7 p.m., Thursday, September 1, 2016, at the United Methodist Church in Vergas with a prayer service to be held at 7 p.m. Visitation will continue one hour prior to the service at the church on Friday.

Jane Mavis Bruhn was daughter of Arthur and Mayme (Katzke) Hein, born on March 30, 1926. Jane attended the Vergas School and graduated from Frazee High School in 1943. Following graduation Jane began working at the Vergas State Bank where she worked from 1944-1948. She later worked as the bookkeeper for the family farm.

Jane married Claudius (Cloudy) A. Bruhn on December 15, 1948 and had 5 children. Cloudy and Jane lived in Vergas the first 3 years of their marriage and then moved to the Bruhn Family Farm by Sybil Lake. It was in 1962 that Jane and Cloudy began turkey farming.

Jane was an active member of the Vergas United Methodist Church, Vergas Cemetery Association and the Women’s Auxiliary; later the VFW. She was the charter member of the women’s Lioness Club and continued as an active member when it later became part of the Lions Club. In 2011, Jane received the award for the Dedicated Humanitarian Services from the Lions Club International Foundation. Jane was also active in supporting the Hobart Township Charity and the American Cancer Society Spring Daffodil Days and the Holiday Love Lights a Tree. Family was Jane’s passion.

She never missed a milestone event or celebration. She also enjoyed reading, travel, snow village collection, flower garden and having a green lawn.

To order memorial trees or send flowers to the family in memory of Jane Bruhn, please visit our flower store.