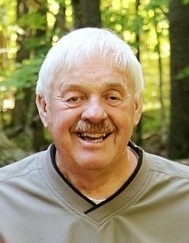 John was born June 4, 1948, in Detroit Lakes, MN, to Willman and Mary B. (Stutzman) King.  John grew up in rural Detroit Lakes, where he attended Frazee High School, graduating with the class of 1966.  Following high school, John attended vocational school where he studied boiler operations.  John then went to work driving truck for the Daggett Truck Line before starting his own business, John’s Mill and Logging which he owned and operated in Frazee for many years.  John married Diane Oelfke April 5, 1975, at Mount Olive Lutheran Church in Detroit Lakes.  The couple made their home in rural Detroit Lakes and raised two children: David and Janet.

John later purchased his own semi-truck and drove for Bergen’s and Alex Bishop, which he continued to do until the time of his passing.

John kept immaculate gardens and he loved to share the produce he harvested each year.  He was a great neighbor and enjoyed playing cards and visiting with his many friends.  John loved attending his grandchildren’s sporting events and was their biggest fan. John enjoyed the outdoors, especially hunting and fishing and was also an avid wood worker.  He served on the Height of Land Township board for more than 40 years. He was a faithful member of Mount Olive Lutheran Church where he enjoyed attending worship.  John will be dearly missed by his many friends and his family.

Click to download / open
To order memorial trees or send flowers to the family in memory of John King, please visit our flower store.
Open