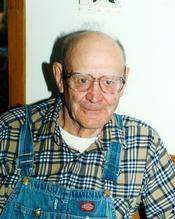 Julius had a heart of gold. He was a kind soul, willing to help anyone in need. He enjoyed working in the woods, dancing, and watching deer and turkeys from his front window. In his later years, Julius and Frances also enjoyed frequenting the local restaurants where they enjoyed pie and coffee. Julius enjoyed living close to his son and often walked over to help Jim in his repair shop. Julius left this world a better place than he found it, with soft spoken words of kindness and caring hands. He will be missed by all who had the pleasure to know him.

To order memorial trees or send flowers to the family in memory of Julius Kruger, please visit our flower store.