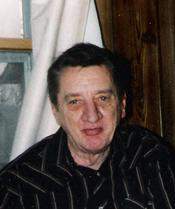 Kenneth was born February 24, 1947 to Eugene Ernest and Elaine May (Jenson) Riebe at St. James Hospital in Perham, MN. He was baptized at the Riebe residence on April 25, 1947 by Reverend W. J. Luttman. He grew up in Frazee where he attended school. Kenneth was united in marriage to Mary Sahlberg on October 18, 1968. They later divorced. In the early 1970's, Kenneth gained employment with the Daggett Truck Line in Frazee where he worked for a number of years. He then went on to work at the Swift Plant in Frazee until 1982. He then made his home in Alexandria, MN where he remained until July 27, 2005, when his health required him to move to the Frazee Care Center. He remained there until October 1, 2005, when he moved to the Frazee Care Center Assisted Living, where he remained until the time of his passing.

During his younger years, Kenneth enjoyed fishing with his Dad during both the winter and summer months. He also enjoyed playing a good game of cards and watching TV.

He was preceded in death by his father and his grandparents, Emil and Bessie Riebe and Edwin and Anne Jenson.

To order memorial trees or send flowers to the family in memory of Kenneth Riebe, please visit our flower store.