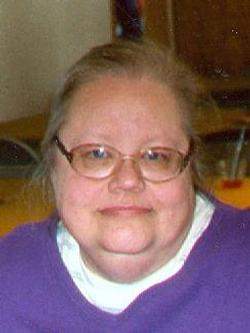 
A Memorial Service for Keri will be held Saturday, May 3, 2014, at 1 p.m., at Furey Funeral Home in Frazee. Burial will take place at Bethlehem Lutheran Cemetery following the service. Furey Funeral Home is assisting the family with funeral arrangements. To leave online condolences, please visit www.fureyfh.com.


Keri was born May 10, 1960, daughter of Orpha (Thompson) Jackson. She grew up in Frazee where she attended school. Following her schooling, she worked for a couple, in their home, for a number of years. She then began making dog collars which she sold to the retail market, which she truly enjoyed.


Keri liked to be home making dog collars, watching television and movies with her schnauzer, Scooter. She was deeply saddened when Scooter passed away.


Keri eventually moved in with her Mom, Orpha and the two took care of one another. Following a cancer diagnosis, Keri made her home at Frontier Manner where she spent her last days.


To order memorial trees or send flowers to the family in memory of Keri Thompson, please visit our flower store.